After Southaven pastor sees 50% spike in funerals, a plea for Thanksgiving

A link has been sent to your friend's email address.

A link has been posted to your Facebook feed.

Welcome to our new and improved comments, which are for subscribers only. This is a test to see whether we can improve the experience for you. You do not need a Facebook profile to participate.

You will need to register before adding a comment. Typed comments will be lost if you are not logged in.

Please be polite. It's OK to disagree with someone's ideas, but personal attacks, insults, threats, hate speech, advocating violence and other violations can result in a ban. If you see comments in violation of our community guidelines, please report them.

After Southaven pastor sees 50% spike in funerals, a plea for Thanksgiving

The Rev. Bartholomew Orr talks about the increase in funerals in 2020 Memphis Commercial Appeal

SOUTHAVEN — On at least one occasion this year, Pastor Bartholomew Orr has preached four funeral services over the course of a three-day weekend. Several times, he has led multiple funeral services on a Saturday. Time and time again, he crafts an individualized message about the deceased to their grieving family and friends, but keeps his message about the church's COVID-19 protocols the same. His church, Brown Missionary Baptist Church in Southaven, has averaged more than a funeral a week this year.

After delivering the church's 77th funeral service Friday — a 50% increase from last year's total of 51 — Orr issued a plea that families stay 比特币合约交易地址_合约交home for the holidays.

"We are encouraging people — and especially with the numbers going back up — to really practice all of the safety guidelines, to avoid big family gatherings and to know that this isa time where the most vulnerable people, sometimes just coming over to somebody's house can affect those that are most vulnerable," Orr said.

To be sure, not every funeral service at the church has been for a person who has died by COVID-19, and Orr did not have statistics immediately available for causes of death. But the increase paints the local picture of a nationwide trend: More people than usual have died this year, whether it be due to COVID-19 or other health factors that might have worsened because of various barriers to preventative care. 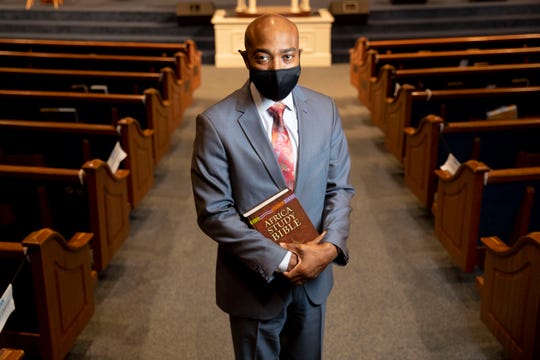 Nationwide, there was an 18% increase in deaths in the United States between mid-March and early November, according to a New York Times analysis of Centers for Disease Control and Prevention data. In Tennessee, where deaths have peaked recently, there's been 14% more deaths than normal, and in Mississippi, where deaths peaked this summer, the increase has been 25%.

And, Orr pointed out, local crime has been up, too. Memphis surpassed its previous homicide record by October of this year and is currently reporting 263 homicides (excluding vehicular manslaughter), according to city data available Monday.

Memphis homicides: A look inside the record 2020 numbers

"I've literally preached one spouse funeral, and then a couple of months later had to preach the other spouse funeral," Orr said. "Families have literally had multiple deaths in their families...families have had to grapple with all of that in addition to the pandemic, political unrest. It's been an interesting year, 2020."

A link has been posted to your Facebook feed. 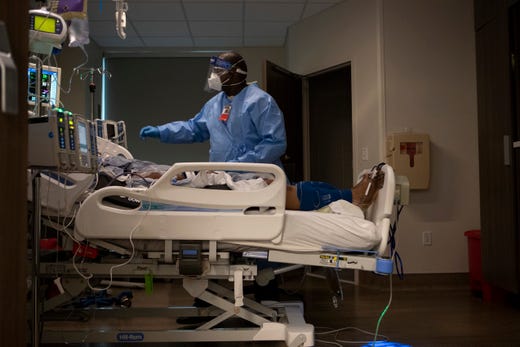 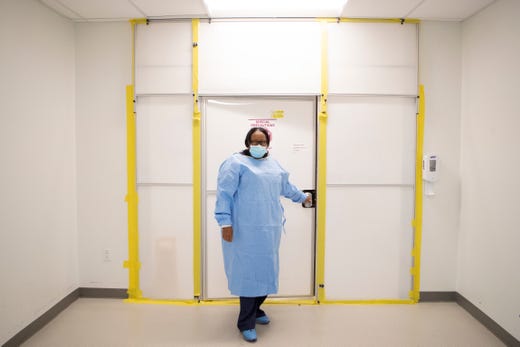 Clinical Director Gladys Harris stands at the "Hot Zone" entrance to Methodist University Hospital's COVID-19 unit on Friday, Aug. 21, 2020. By creating three zones at the entrance of the wing, staff don full protective gear which they wear throughout their shift to avoid contamination of the rest of the hospital and prevent their own infection. “Seeing people out, I’m going to stop them and say, ‘Please put a mask on, I really don’t want to see you in my unit’. It’s real. It’s serious,” said Harris. Joe Rondone/The Commercial Appeal
Fullscreen 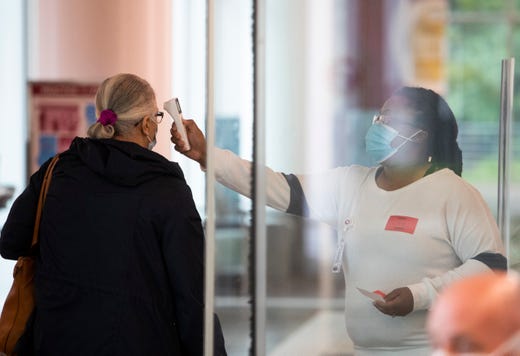 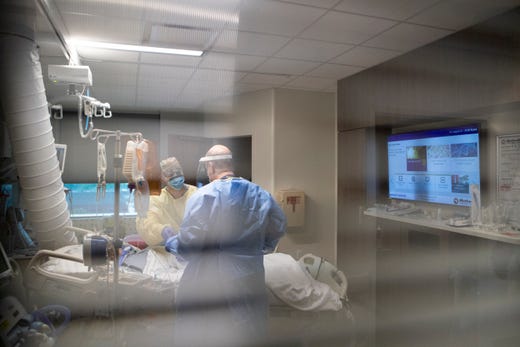 Registered Nurse Adam Olson, left, and and Ralph Micheletti, certified wound care nurse, work with a patient inside Methodist University Hospital’s COVID-19 unit on Friday, Aug. 21, 2020. Editor's note: The patient's name, which was visible on the screen inside the hospital room, has been removed at the hospital's request in the interest of patient privacy. Joe Rondone/The Commercial Appeal
Fullscreen 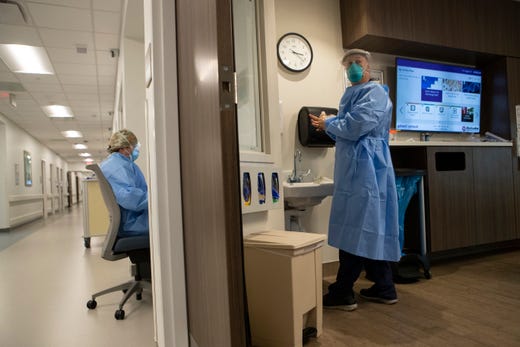 Ryan Campbell, Registered Nurse, works at a desk while and Ralph Micheletti, certified wound care nurse, washes up after interaction with a patient inside Methodist University Hospital’s COVID-19 unit on Friday, Aug. 21, 2020. Editor's note: The patient's name, which was visible on the screen inside the hospital room, has been removed at the hospital's request in the interest of patient privacy. Joe Rondone/The Commercial Appeal
Fullscreen 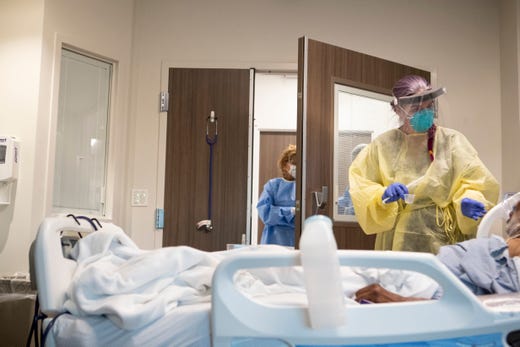 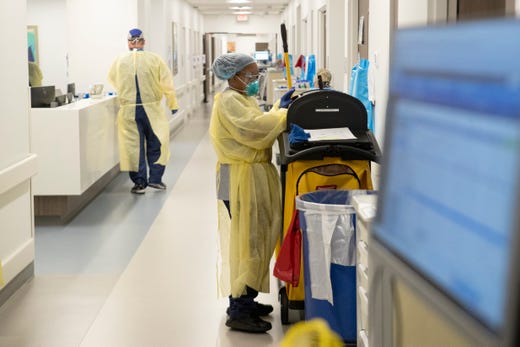 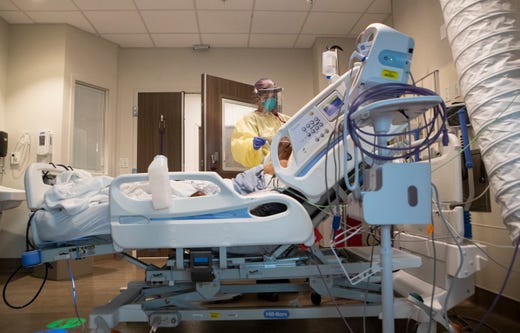 Registered Nurse Sheila Purcell works with a patient inside Methodist University Hospital’s COVID-19 unit on Friday, Aug. 21, 2020. The unit, which has been transformed into a completely sealed environment from the rest of the hospital, contains ICU, step-down and medical surge COVID-19 patients. Joe Rondone/The Commercial Appeal
Fullscreen 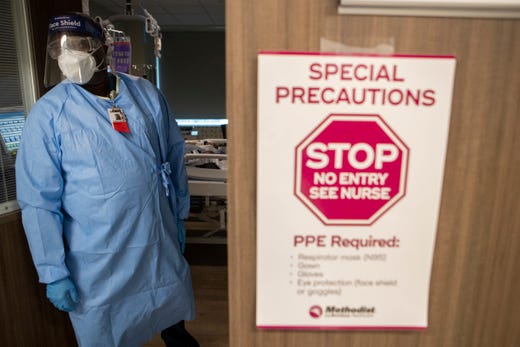 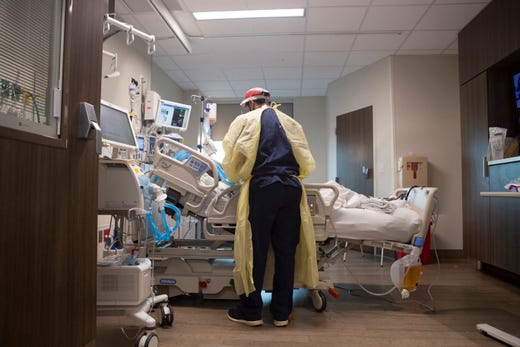 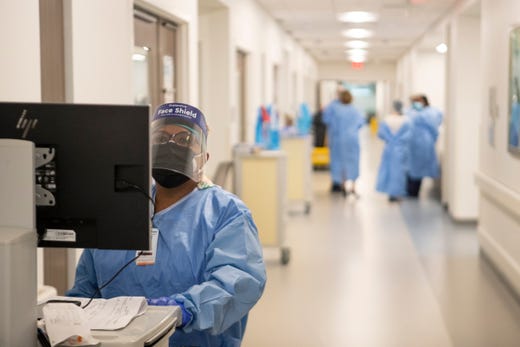 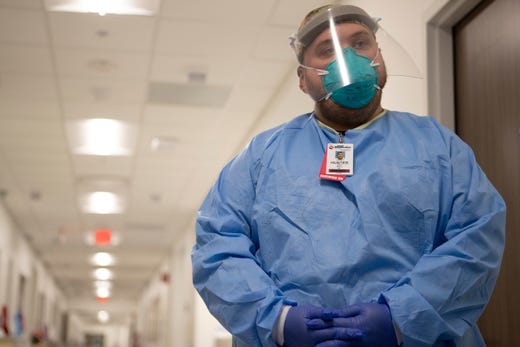 Registered Nurse Hunter Delk works inside the "hot zone" of Methodist University Hospital's COVID-19 unit on Friday, Aug. 21, 2020. “We are facing stressors that we never really had to face before, but we are all adapting … right now this is my new normal,” said Delk. Joe Rondone/The Commercial Appeal
Fullscreen 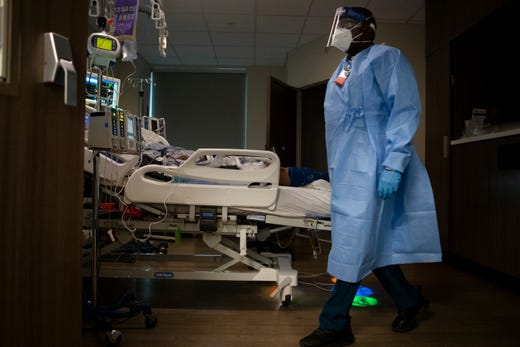 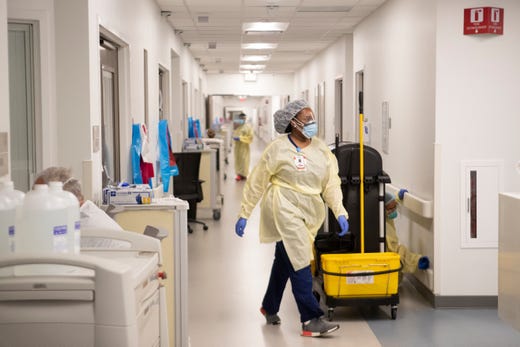 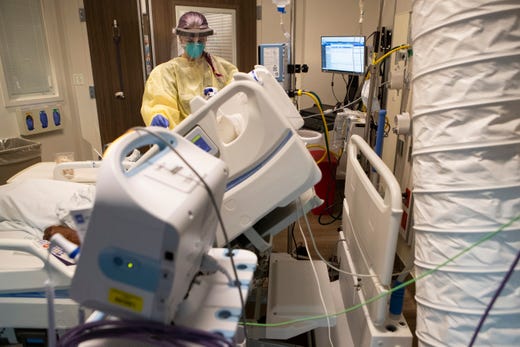 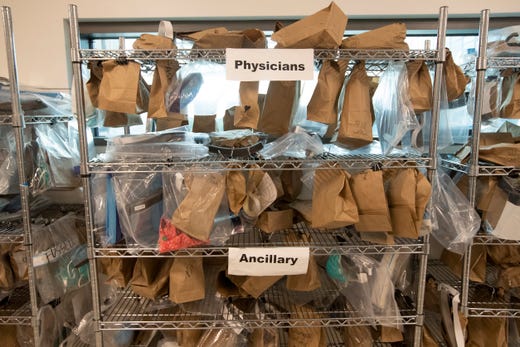 Staff leave their protective gear in the "cool zone" between shifts, part of the three separate spaces used to create a barrier for the rest of the hospital from Methodist University Hospital's COVID-19 unit. Joe Rondone/The Commercial Appeal
Fullscreen

Registered Nurse Alan Strickland works inside the "hot zone" of Methodist University Hospital's COVID-19 unit on Friday, Aug. 21, 2020. “COVID patients do not have a lot of reserve. They’re fighting, and when they crash, they crash quickly. It’s different when you can’t be surrounded by people you love, so the least we can do, we can be there for them," said Strickland. Joe Rondone/The Commercial Appeal
Fullscreen 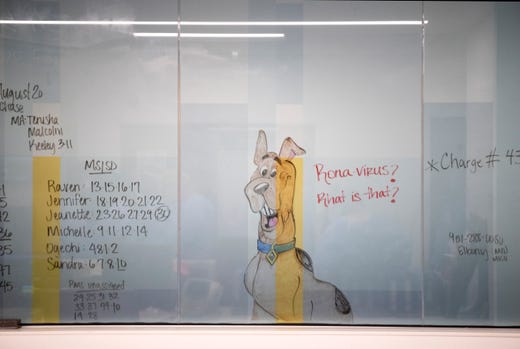 A Scooby Doo character is drawn on the board next to nurses notes, lightening what can be a heavy space for care takers inside Methodist University Hospital's COVID-19 unit on Friday, Aug. 21, 2020. Joe Rondone/The Commercial Appeal
Fullscreen

Interested in this topic? You may also want to view these photo galleries:

In some instances, particularly with COVID-19, the death may be sudden. And it's struck his own family and the church family, too.

"There are times when it has been a sudden, unexpected (death)...So I might talk about the storm that Jesus was in that was suddenly unexpected, just to let people know that, 'You know what, here's the truth of the matter. It's going to happen, you know? And although it does happen, how can we find comfort in it? For that is the presence of the Lord even in the midst of a storm,'" Orr said.

Wilford Barnes, a member of the church for more than 12 years, recently buried both his mother, and the niece who cared for her. His mother, 85, died of COVID-19 complications on Nov. 13. She and Barnes' sister, who live together, both had the disease. His niece, 42, died the week prior, though it was unclear if she had coronavirus at the time of her death. 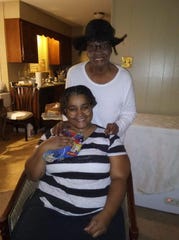 Mary Alice Bolden-Pleasant stands behind her niece Phyllis Biggs. Both women died in November, one week apart. Pleasent-Bolden died at 85, after being diagnosed with COVID-19. Biggs, who lived in the same household, was never tested for the virus before she passed at age 42. (Photo: Courtesy Wilford Barnes)

Sometimes, Barnes said, he'd go over to visit and help out. His mom was bedridden after a stroke a paralyzed her for the last year, and also had health workers coming to help care for her, too.

"Sometimes I would actually take my mask off and kiss her on the cheek. So she will feel me. So she would feel my touch. And being that close," Barnes said, pausing. "I just thank God that I didn't catch the COVID."

The family planned to hold an indoor viewing and then socially-distanced graveside service outdoors — being indoors for a service, in his view, is still too risky. They planned to set out 30 chairs, six feet apart from one another, at the gravesite, and everyone has to wear masks, Barnes said. He planned to enforce all of the social distancing rules.

There won't be a big gathering at the holidays, for a year when Barnes' has two other family members to mourn, too: One died of stage IV cancer, and another was shot and killed earlier this year while driving on Mill Branch Road, Barnes said.

"This is going to be very strange," Barnes said of Thanksgiving. Where he'd usually have 20 people at his house, this year's celebration will be himself, his wife and mother-in-law. There's no way to know where the other family members have been going or how they might be exposed, he said.

"There is social media that you can (use): FaceTime, Facebook, ooVoo, (Google) Duo. They've got all the different types of media as a way you can see your family on on those special days," Barnes said. "So that's what we're doing, phone calls. We're taking it that seriously."

At Brown Missionary Baptist, Orr recently opened up church services in October, after shuttering in March. Serving a predominantly Black population, which has been disparately impacted by the pandemic, Orr felt a particular obligation to safety. People who attend now have to sign up ahead of time, and capacity is limited to about 10% of the 2,000 or so people that the building can hold. He has a church task force that reevaluates conditions each month. 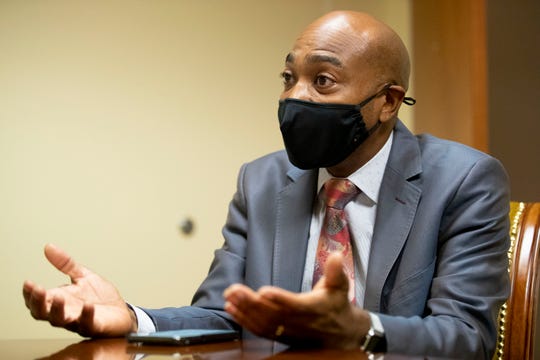 He kept funeral services open, but restricted at first to 10 people. Now, those are also held to 10% of the 1,200-person capacity in the sanctuary: Every other pew is taped off, and the number of people per pew is limited for social distance. Because the church has a spacious building, Orr held funeral services for people who weren't members but whose churches weren't open.

"It has been an increase (in deaths). It has taken a toll," Orr said. "But we're grateful that as a church family, we've been able to embrace people at this time, especially in the midst of this pandemic, and to really help to give closure to families."

Laura Testino covers education and children's issues for the Commercial Appeal. Reach her at laura.testino@shujwhcb.com or 901-512-3763. Find her on Twitter: @LDTestino